Flaubert declared that Genoa, Italy’s largest sea port, had “a beauty that tears the soul”. Almost 20 years have passed since Genoa was 2004 European City of Culture and the city has undergone a radical makeover.

Heart of the Italian Riviera

Genoa has a heart and soul like no other.

“It is a place that ‘grows upon you’ every day. There seems to be always something new to find. There are the most extraordinary alleys and by-ways to walk about in. You can lose your way twenty times a day, if you like and turn up again”. 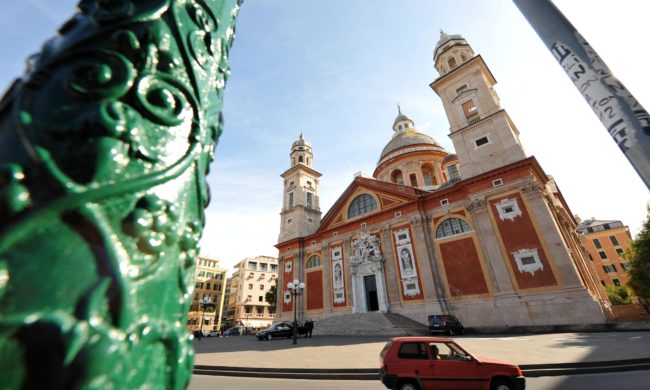 Genoa reveals itself one step at a time, and when it does, it always reveals more than you could ever imagine.

Very recently, Genoa has been feted in almost all of the major international newspapers and magazines as one of Italy’s best kept secrets (don’t just take our word for it – read these wonderful articles in the international press extolling the city’s virtues in The Guardian, The New York Times, The Daily Telegraph). In 2019, the area was nominated as one of the New York Times’ top places to visit.

The nation’s sixth largest city, this thriving port set in front of rolling green hills has much to offer, including a stunning World Heritage Site – the Palazzi dei Rolli. Of course the climate is extremely mild, very rarely going below freezing even in the heart of winter, and every season, there can be one of those sunsets after a bright blue day that makes you stop in your tracks and gape. Genoa isn’t Rome or Florence – and that’s exactly part of its charm.

In 1005 Genoa became a republic and for eight centuries, Genoa – along with Venice, Pisa and Amalfi – was one of the great maritime republics of what is now Italy. Back then, it was every republic for itself, fierceness fuelled with desperation, flamed by ingenuity. Genoa possessed all three in abundance. Set in the steep curve of the north-western Italian coastline, the city had nowhere to graze cattle, raise wheat or escape invasion. There was only the sea, to navigate, dominate and to launch locally fabricated galleys. Commerce was not always practiced with noble intent, but always with ruthless drive, which, in time, consolidated fortunes into the hands of a few families who still own swathes of the city.

Genoa is a place of several firsts and superlatives: the first bank, Casa San Giorgio founded 1407; the first football team, Genoa C.F.C., 1893; the most famous explorer, (disputably) native son Cristoforo Colombo; and the most notable prisoner, Marco Polo, who was imprisoned in 1298 during a war between Genoa and Venice, then rival republics.

The city’s centrepiece is Piazza de Ferrari, between the modern centre of the city and the historic old town. The latter, just off the harbour, is a glorious network of narrow alleys and streets, known as the vicoli, with surprises around every corner. You could spend hours if not days wandering around this part of the city alone, a network of historic shops each with their own fascinating stories, side by side with a bright new crop of fashionable shops, restaurants and bars. The port is home to the city’s most popular tourist attractions, among them the recently renovated Galata Museo del Mare, which deftly chronicles Genoa’s maritime history. The old port has a vintage atmosphere and is a popular spot, as is the beloved aquarium, Europe’s largest, which was part of the 1992 rehabilitation of the neighbourhood overseen by world famous architect Renzo Piano, a native of Genoa.

Walking across Genoa’s sloping urban patchwork can sometimes feel like stepping into one of Piranesi’s intricate engravings, a cityscape that seems to have been cut up and glued back every which way. Dense hills are crisscrossed by secret footpaths called crêuze, which thread up and down, and in and out. They can be shortcut by one of the city’s strange dozen-plus elevators and funiculars, which whizz you inside the mountains. But arguably Genoa’s greatest selling point is the collection of 42 UNESCO recognized former palaces that are peppered throughout the Strade Nuove area. The Palazzi dei Rolli – palace of the rolls, lists of mansions that hosted visiting dignitaries – were collectively made a World Heritage site in 2006, some becoming museums, others private homes, some still working buildings, such as banks or shops. These baroque and renaissance palaces are stunning, with tall ceilings and incredible paintings that wouldn’t look out of place in the Sistine Chapel.

Like all great cities though, Genoa isn’t just about the past and in the 1980s it became a centre for high-quality, hi-tech electrical engineering, electronics and aerospace.

Nationally Genoa is considered to be one of the hearts of the Italian music scene, having spawned famous singer songwriters like Fabrizio De André, Bruno Lauzi, Luigi Tenco and Umberto Bindi. You can visit the singer-songwriters museum in the vicoli at viadelcampo29rosso. To be able to capture the melancholy beauty of the view of the sea from a cobbled alley in Genoa at sunset, try listening to locally idolized De Andrè’s Creuza de Ma. 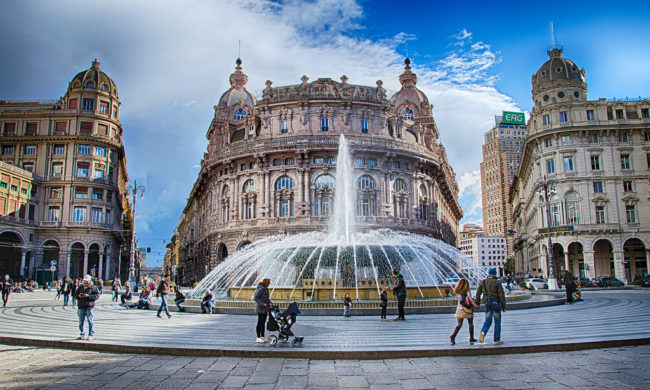 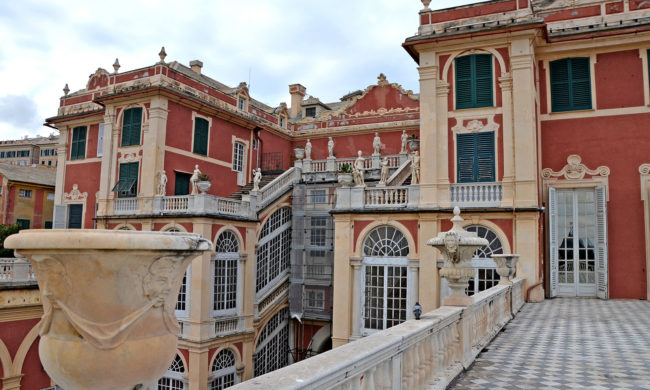 Ligurian and Genoese cuisine uses characteristic flavours typical of the area, reflecting the creativity of its people. It’s a simple, poor cuisine, rich in vegetables and herbs, making wide use of olive oil: this helps make delicious, flavoursome dishes which are very natural and attractive. This recent article by The Guardian really helps you get a feel for the food.

Recommended during a stay in Liguria:

Pasta al pesto: traditional long pasta with basil sauce, potatoes and green beans. Pesto contains garlic and pine nuts.
Farinata: a low, flat focaccia made out of chickpea flour mixed with water, salt and olive oil, baked in a wood-burning oven.
Ravioli or pansoti in salsa di noci: stuffed pasta such as the traditional ravioli and typical pansoti (pasta filled with chard, eggs and ricotta cheese), served with a walnut sauce.
Focaccia: an original speciality of Ligurian cooking famous the world over. This is delicious, whether it be plain, made just with olive oil, or the many other savoury versions (with onions, with olives, with sage, with cheese… the list is endless!)

Here are some suggestions of conventional places where to try typical Genoese Cuisine, but don’t forget also that new central gourmet market Mog, which opened beneath the arches of Mercato Orientale’s historic cloister in May 2019 also brings an exciting open-all-hours dimension to the city’s largest lively fresh produce market:

Medium-high price – for a treat (we suggest advance booking) 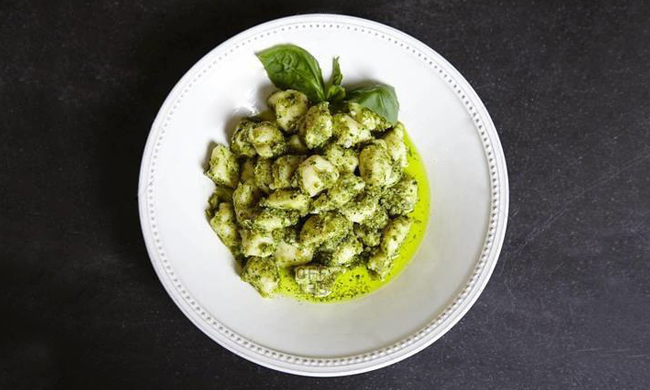 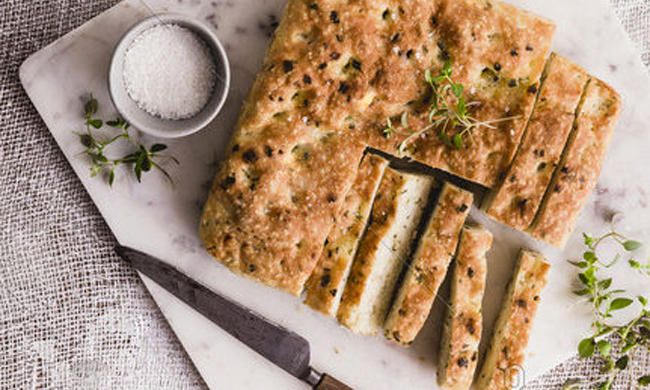 Genoa is packed with bars and pubs, with everything from classy Riviera style aperitivo lounges to grungy hang-outs. Just take your pick!

In the historical centre on Wednesday and Friday nights, the place is packed with young people. The little alleys and pathways really come to life, with groups of people getting together for a drink – Genoa’s evening “movement” is known as the movida. Consider Piazza delle Erbe to be the central point.

During the Covid emergency bars, pubs and restaurants must stick to local Covid regulations – check with each location before you go as most also offer pick-up and delivery services. 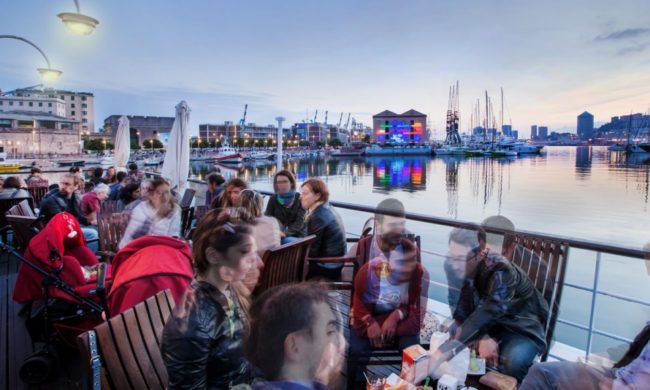 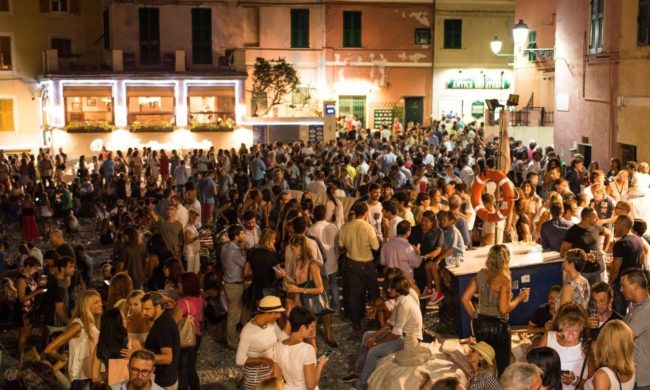